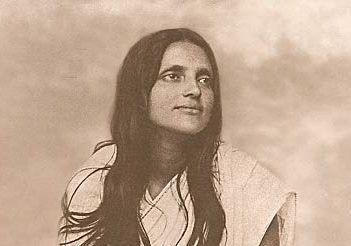 Anandamayi Ma (born as Nirmala Sundari; April 30, 1896 – August 27, 1982) was an Indian spiritual master, known as Bliss Permeated  Mother, as her devotees called her. She was born in a respectable family living in poverty in Bengal. Her father spent most of the time immersed in chanting mantras and in singing with devotion, while later on her mother renounced mundane life and she devoted herself to strict spirituality. Nirmala attended village school for about two years. Although the teachers were pleased with her ability, the girl was constantly indifferent to the world and always joyful.

When she was thirteen years old, according to the rural customs, they arranged marriage for her. She spent five years  at  her brother-in-law’s home, doing the housework, most of the time in a withdrawn meditative state.The neighbor Harakumar was the first one who recognized her spiritual greatness and started addressing her as ‘Ma’ (‘mother’) and prostrated  before her in reverence every morning and evening.

When Nirmala was about seventeen, she went to live at her husband’s house. At the wedding, the village pandit who conducted the ceremony, told the husband: ‘Son, you do not know what  jewel you are taking to the house. Her radiance becomes visible even through the clothes. She is not an ordinary person!’ That was a celibate marriage  – whenever her husband tried to approach her, Nirmala’s body seemed  lifeless  or she fainted. Later on, her twelve years older husband recognized aura of  sacredness which was around her and he treated her as a divine child. Later, when she got followers, he became her disciple which is extremely rare in Indian society. He received initiation from her, the name Bholanath as well, and he accompanied her on all the journeys till death.

In August 1922, twenty-six-year-old Nirmala began her own spiritual initiation. Later she described how Guru appeared from within, giving instructions to her and energizing her, only to be absorbed in her own self again afterwards. She said: As the guru, I revealed the mantra; as the disciple, I got it and I started repeating it’.

Nirmala moved to Dhaka with her husband  in 1924. During this period she went into ecstasies at public kirtans. Jyotiscandra was an early and close disciple, and the first one who suggested that they call her Anandamayi Ma, meaning Bliss Permeated Mother. He built the first ashram for her. In 1926 she formally settled in the abandoned Temple of Kali in Shahbag where she spent a year or so. In the following period more and more people were attracted to what they saw to be a living embodiment of the divine. In this period she stopped taking food on her own. She said to her closest students that, if they wanted her to stay in that body, they had to take care of it. Till the end of her life, a small group of female students fed her with their own hands, bathed her and dressed her. In May 1929 a distinct model of Ma’s later life began to manifest. On the day when her disciples built an ashram for her in Dhaka, which contained a small hut for her, at the inauguration ceremony, Ma announced that she would leave Dhaka on that day. From then on  the following 50 years she  travelled throughout India with no plan, rarely staying in one place longer than two weeks. Although the number of her followers exceeded tens of thousands, Ma went on with her spontaneous journeys. Though she had never given formal talks, she answered countless questions, asked by her students and also by exceptionally learned people. She spoke about herself as ‘this body’ or as ‘this little child’. She considered individual identity as a kind of spiritual disease. When some of her disciples complained of crowds of people who followed her, she replied: “ As you do not feel the weight of your head, of hands, and of feet … so do I feel that these persons are all organic members of THIS BODY; so I don’t feel their pressure or find their worries weighing on me. Their joys and sorrows, problems and their solutions, I feel to be vitally mine … I have no ego sense nor conception of separateness.”

Ma left the body on August 27, 1982, recognized as a national spiritual figure, respected and loved by both Indians and Muslims.