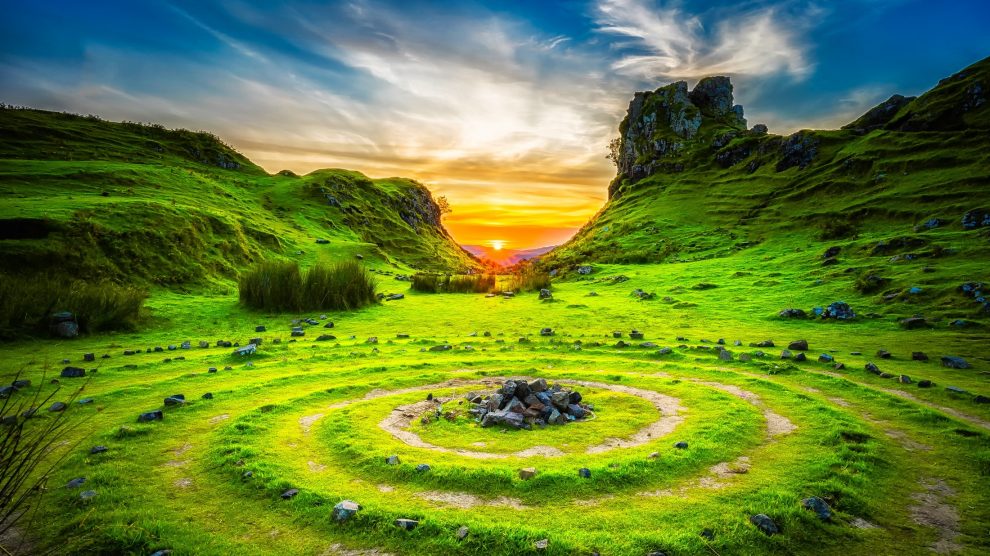 Question: According to what I have read, the life span of the universe includes quite a number of cycles which are composed of yugas. I was wondering if the Supreme incarnates on earth in every single cycle of yugas or only in this particular segment?

Sri Chinmoy: At the very beginning of Time, the Supreme did not send Avatars, His direct representatives, to earth. His creation started and lasted for a long time without Avatars. Then the Supreme thought that if He sent His direct representatives to earth, earth would make more progress. He had created a garden. He thought that from the Highest, with His spiritual Power, He would be able to take care of this vast garden. But the garden was not receptive enough. So He started sending the Avatars to take care of His beautiful creation. Many saints and others say that each Avatar is like a gardener, and the gardener has many assistants and helpers.

As you know, Indian mythology has divided Time into four yugas — satyayuga, tretayuga, dvaparayuga and kaliyuga. In one cycle, or yuga, there are many spiritual Masters and there can also be more than one Avatar. We take Sri Ramachandra as the first authentic Avatar in human form. Then came Sri Krishna and Lord Buddha.

Some scholars say that Sri Krishna lived on earth 5,000 years ago. I do not agree with them at all. It was absolutely 8,000, 9,000 or 10,000 years ago that Sri Krishna came. In Lord Buddha’s case, it is established that he came a little over 2,500 years ago and Jesus Christ 2,000 years ago. Then, after the Christ, it seems there was a big gap. Sri Chaitanya came just over 400 years ago. Right after Sri Chaitanya, there was another gap to Sri Ramakrishna. And, in Sri Ramakrishna’s time, Sri Aurobindo also came. There it was not a matter of even a hundred years’ gap. It was only about forty years.

So in this present cycle we are getting many more Avatars. Again, in the twentieth century, we also have Ramana Maharshi and Anandamayi Ma.

Who is not an Avatar, that is the question. All human beings are direct representatives of God, only an Avatar is more aware of his inner existence or his Source. Then God tells him, “I am blessing you with a boat. Now you have to carry a few thousand or a few million seekers to the other Shore.”

But some seekers are wise. If you show a miracle in front of them, they will say, “Who cares for it? Did it transform my nature? What I was before I accepted the spiritual life, now I am the same. So what good did the occult power do?”

You can say that a miracle is like fireworks. When the firework goes up, it is so beautiful and for one second we get such joy. Then it falls down. Did it change our nature? No. Only for a fleeting second we say, “O my God, it is so beautiful!” But our human nature remains the same. We still have the same doubt, the same fear and so on.

Again, if our dear one is dying and the Master can be of any help with his occult powers, then that person may get an extension to live on earth for another ten or twenty or thirty years. In that sense, it is good. During those twenty years, that person is getting the opportunity to pray and meditate and become a spiritually developed, good human being.

But those who are wise, when they accept one boat, stick to it, whether the boat goes slowly or quickly. There are some true stories where the spiritual Master is teaching his students very sincerely and devotedly. Then there comes a time when the Master clearly sees that a particular student has far surpassed him.

In one case, which is absolutely authentic, there was a spiritual Master of a very high order. He initiated a certain disciple and then he saw that in a very short space of time the disciple had far surpassed him. So he prayed to the disciple, “Please promise me, in our next incarnation, you have to be my Guru.” The disciple could not believe his ears. He said, “What is this? My Master has given me such high, high experiences. Now he is begging me to be his Guru in his next incarnation.” Then the disciple saw the sincerity of the Master and he promised that he would fulfil the Master’s wish. The Master was so relieved and, in a few months’ time, this spiritual Master left the body.

To come back to your question, the very first yuga — satyayuga — is called the Golden Age. God alone knows whether the Golden Age was really golden. When the present is not giving us joy, when the present is not charming or beautiful, we try to glorify the past. We claim that our forefathers were all saints. There is nobody from that era to say otherwise. Perhaps if some contemporaries of our forefathers were alive, they would tell us something different!

If we study the Mahabharata, we see that a tremendous battle took place between the divine forces and the forces of ignorance. Was there any time in God’s creation when there was no fight between good and evil? We give it the term ‘darkness’. At what point of civilisation was there no fight against darkness? In our times we have had the Second World War. But in the Mahabharata time there was also a battle. You may say that your forefathers, whom you call saints, were fighting against the evil forces. True, but the fact of the matter is that those evil forces lived at that time as well. Then how can we say those days were golden? Human beings who lived at that time also had the same weaknesses that we still have after so many centuries.

In terms of nature’s transformation, I feel that people today are more conscious of the supreme necessity of peace, love and oneness. Two thousand years ago, human beings believed more in morality. Again, in some centuries, there was no morality at all. Everything was “might is right”. But nowadays I see that in everybody’s heart peace-hunger is there. I may not be peaceful, you may not be peaceful, the world may not be peaceful. Left and right, countries may be fighting. But we see that peace is needed. There is a genuine hunger for peace.

Two thousand or three thousand years ago, they did not use the term ‘peace’. Only they saw that darkness existed and light also existed. Each side believed that they had the light and the other side was all darkness.

Now people are a little more wise. There are many good people on earth who have come to the point where they feel that they are not the only ones to be the possessors of light. There are others as well. A day will come when we will no longer make comparisons.

In a family, you will eat the food prepared by your mother or your sister. In my family, I will do the same. As long as we are satisfied by the preparations made by our dear ones, why do we have to go to our neighbours and say, “My food is much better than yours”? Whatever we get from our own family is excellent for us and whatever others get from their family is excellent for them. If both of us are satisfied, then there will be no comparison, there will be no fight. A fight only arises if you say that for my good you are forcing me to eat your food, or if I say that for your good you must eat the food that I am eating.

I have elaborated on your question in my own way. One Avatar does not encompass all the yugas. And, again, in one yuga there can be more than one Avatar. The more you read about Avatars, the more you can become confused because, in one sense, you have to take each human being as an Avatar. Each human being, each creation of God, is His representative. As long as we know there is a Source, then we become the representative of that Source. Everybody can interpret these spiritual concepts in their own way. If you get satisfaction from your interpretation, then you are the luckiest person. And if you do not get satisfaction, then you become miserable.

The difference between Christ, Ramakrishna and God