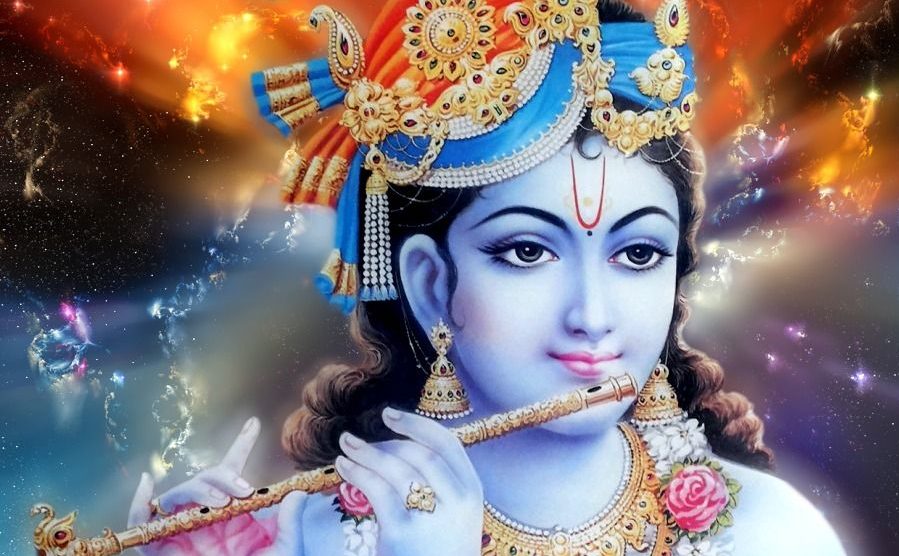 We know about the life of Sri Krishna from two ancient Sanskrit epics: Srimad Bhagavatam, which speaks of his early years, and Mahabharata, which describes the events grouped around the great battle of Kurukshetra. Some historians think Krishna lived 5000 years ago, but spiritual teachers of the  highest order date the time of his life differently (“Some scholars say that Sri Krishna lived on Earth 5000 years ago. I do not agree with them. Sri Krishna came  8000, 9000 or 10000 years ago” – Sri Chinmoy)

Krishna belonged to the tribe of  Yadavas which was part of the Vrishni clan. Born in Mathura he was the eighth son of princess Devaki and her husband Vasudeva. King Kamsa, Devaki’s brother, took the throne by force, throwing his own father, king Ugrasena into prison. Fearing the prophecy which predicted that he would be killed by the eighth son of princess Devaki, Kamsa imprisoned Vasudeva and Devaki. He killed their six children, but the seventh, Balarama, they managed to save under the guise of abortion. When Krishna was born, knowing that his life was in danger, they somehow managed to smuggle the child out of the prison and hand him over to the care of Yashoda and Nanda in Gokula. Krishna also had a sister, Subhadra, who was born to Rohini, Vasudeva’s first wife.

Nanda lived a simple lifestyle and was a chief in the local cow-herding community, so Krishna, as a child became a cowherd. There are many stories about his childhood in which he shows extraordinary spiritual powers, and thus reveals that he is the embodiment of God himself. In one of the stories he showed his stepmother Yashoda his Universal Form, and on another occasion, according to the legends, he held the hill above the village with his own hands for seven days in order to protect the villagers from the rain.

As a young man, he often played the bamboo flute. Gopis (milkmaids) from the village, as soon as they would hear his divine music, they would leave all work and come to listen to him. They were his first bhakti, devotees who worshiped the divine in him. Among them the most devoted one was Radha. The stories from this period of Krishna’s life became the foundations of the worship of Krishna (the Supreme) through love and devotion – bhakti.

When he grew up, Krishna returned to his hometown and together with his brother Balarama overthrew the evil Kamsa. He reinstated Kamsa’s father, Ugrasena as the king of all Yadavas, and he himself became a prince. During this period, he befriended Arjuna, the greatest warrior of his time, and other princes of the Pandava’s clan, from the kingdom of Kuru, who were his relatives. Somewhat later, Krishna led his Yadava clan to Dwaraka (modern-era Gujarat) and founded his own kingdom there. He married Rukmini, princess of Vidarbha.

Krishna’s relatives, the righteous Pandavas and the greedy Kauravas, clashed over the throne. The evil Duryodhana, the leader of the Kaurava tribe, deceiving in the game of dice, took away the kingdom of the glorious Yudhishthira, the eldest of the five Pandava brothers. Krishna repeatedly tried to settle the conflict between his relatives through diplomatic activities, but when the Kauravas refused to return at least five villages to the Pandavas, war was inevitable. The whole of India was divided into those who were on the side of the dharma of virtue and the Pandavas, and those who, for the interest or for family ties, sided with the Kauravas. On the eve of the battle itself, when it was already clear that no reconciliation would take place, Krishna offered both sides the opportunity to choose either his army or himself, but on the condition that he himself would not use any weapons. Arjuna, chose Krishna himself, and Duryodhana, prince of Kauravas, chose Krishna’s army. It was decided that during the battle, Krishna would be Arjuna’s charioteer because that did not require the use of any weapons.

Although he was unparalleled hero, Arjuna, seeing his relatives and teachers in the countless enemy army, felt discouraged and lowered his bow, not wanting to fight against them. Then Krishna showed him his Universal Form and gave a sermon on the necessity of fighting for the fulfillment of dharma and the final victory of good over evil. This conversation is a special and the most important chapter of the Mahabharata, known as the Bhagavad Gita. During the battle, Krishna helped the Pandavas in many ways, until the final victory of the good.

Twenty years after Kurukshetra war, at some festivity, an argument broke out between Krishna’s relatives from the Yadava tribe. Krishna’s drunken tribesmen killed each other. Seeing what had happened, Krishna’s brother Balarama, using his yogic power, left his body. Krishna retreated to the forest and sat down to meditate under a tree. One hunter saw his foot and thought it was a deer; he fired an arrow and mortally wounded him. Krishna returned to heaven.

”As a human being puts on new garments, giving up old ones, the incarnated soul similarly accepts new material bodies, giving up the old and useless ones. The soul can never be cut to pieces by any weapon, nor burned by fire, nor moistened by water, nor withered by the wind.”

“O Arjuna, whenever justice declines and injustice prevails, I Myself incarnate and manifest: to protect the good and to destroy the evil, and to establish the inner law of life, I come into existence, from time to time.”

“Because I am beyond the fleeting, and even beyond the eternal, in this world and in the Vedas I am known as the ‘’Supreme’’. He who, with clear vision, sees me as the “Supreme”, knows everything he needs to know; his soul is united with Me. “

“Give up all duties, find refuge only in Me (the Absolute). I will free you from all sins. Do not grieve.”