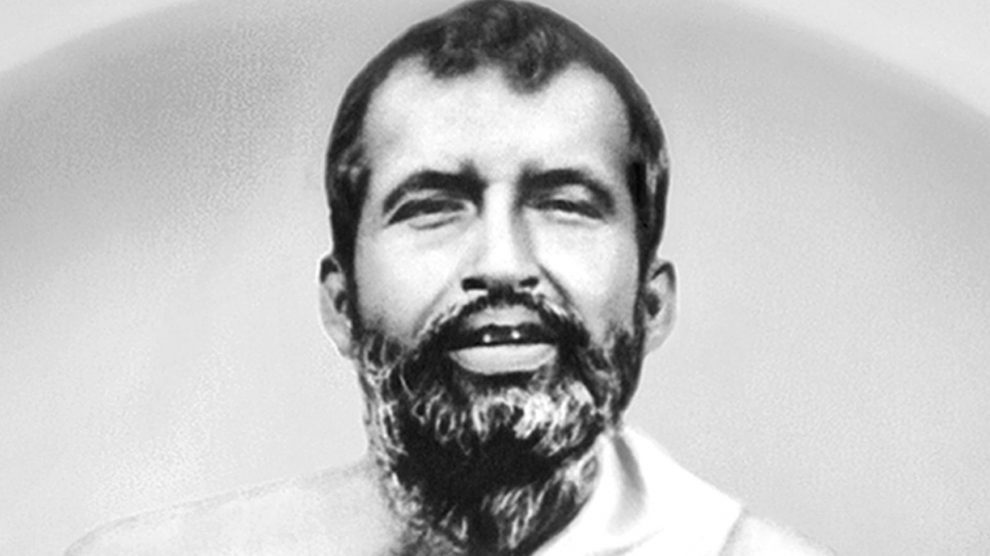 Sri Ramakrishna was born on February 18, 1836 in the village of Kamarkupur in Bengal, India to a very poor, pious Brahmin family. According to the testimony of his disciples, Ramakrishna’s parents had meaningful visions before his birth. His father dreamed of Lord Vishnu telling him that he would be born into his family as a son, while his mother had a vision of the light from Shiva’s temple entering her womb.

Although Sri Ramakrishna attended a village school until the age of 12, he later rejected traditional education. As a child, he was always happy, loved by everyone. At the age of 6, he had his first significant spiritual experience: as he walked through the fields, he saw a flock of cranes in a dark sky full of clouds. He was so absorbed in this scene that he completely lost consciousness, losing himself in immeasurable joy and experiencing the first spiritual ecstasy. Such experiences he had several times while he was still attending school. Towards the end of his schooling, trance states became usual for him.

Ramakrishna’s father died in 1843, so the obligations of supporting the family were passed to his older brother Ramkumar. Ramakrishna spent more and more time with his mother and in devotional activities. Ramkumar moved to Calcutta in 1855 to work as a priest in the Kali temple, and Ramakrishna went with him to help him in his ministry. Ramakrishna and his nephew Hriday worked as helpers in the temple. When Ramkumar passed away the following year, Ramakrishna  became a priest. During this period, he became more contemplative, perceiving in his visions the Mother as the Mother of the Universe. His frequent spiritual visions and ecstasies began.

Rumors reached Kamarkupur that Ramakrishna was mentally disturbed due to spiritual practice in Dakshineswar. His mother and older brother decided to marry him, believing that in this way  he would start paying more attention to earthly life and its activities. Ramakrishna himself suggested to them that they could find the bride for him in a nearby house a few kilometers away. A five-year-old Saradamani (later known as Sarada Devi) was found and a marriage  took place in 1859. Ramakrishna was 23 at the time, but this age difference was typical for Bengal at the time. Sarada remained with her parents until she was 18, after which she joined Ramakrishna in Dakshineswar and became his devotee and disciple. By that time, Ramakrishna had already accepted the monastic life of the sannyasi, so their relationship remained only spiritual until the end. As a priest, Ramakrishna performed the rituals in which Sarada Devi would sit at the spot of Mother Kali and he would worship her as the Universal Mother. Ramakrishna addressed Sarada Devi as the Holy Mother to the end. She outlived Ramakrishna for 34 years and played a significant role in spreading his spiritual teachings.

After the marriage, Ramakrishna returned to Calcutta and continued with intense spiritual practice, under the guidance of masters of Tantra, Vedanta and Vaishnavism. His spiritual visions became constant, and the states of the samadhi became very common. He communicated incessantly with the Divine Mother as a child communicates with his mother. Sometimes he would feel that he was a woman himself and he would dress women’s clothes and put jewelry on.

Once, during three days in 1866, Ramakrishna practiced Islam intensively. He rejected all Hindu deities and devoted himself exclusively to this spiritual practice. After the third day, he realized God on this path as well.

A similar thing happened with Christianity, in 1873 – while listening the texts from the Bible, he absorbed himself  in Christianity. He was in that state for three days, and realized God through the Christian path also.

In the meantime, a circle of devotees and followers who recognized his spiritual light, began to gather around him. He also influenced Debendranath Tagore, the father of Rabindranath Tagore, as well as many intellectuals and people of all classes who had heard of him. A group of dedicated disciples also gathered around him, among whom Vivekananda is by far the most famous. He conveyed the message of his Guru to the West and made it available to the whole world.

In early 1885, Ramakrishna contracted throat cancer, which he refused to cure himself, despite the wishes of his disciples. During his last days, he transferred lot of his spiritual power to Vivekananda, assuring him once again that he, Ramakirshna, was an Avatar. He asked Vivekananda to take care of other disciples, appointing him as the leader of his mission. Ramakrishna left the body in the early morning hours of August 16, 1886. After Ramakrishna’s departure, his monastic disciples, under the leadership of Vivekananda, founded an association that later became the Order of Sri Ramakrishna.