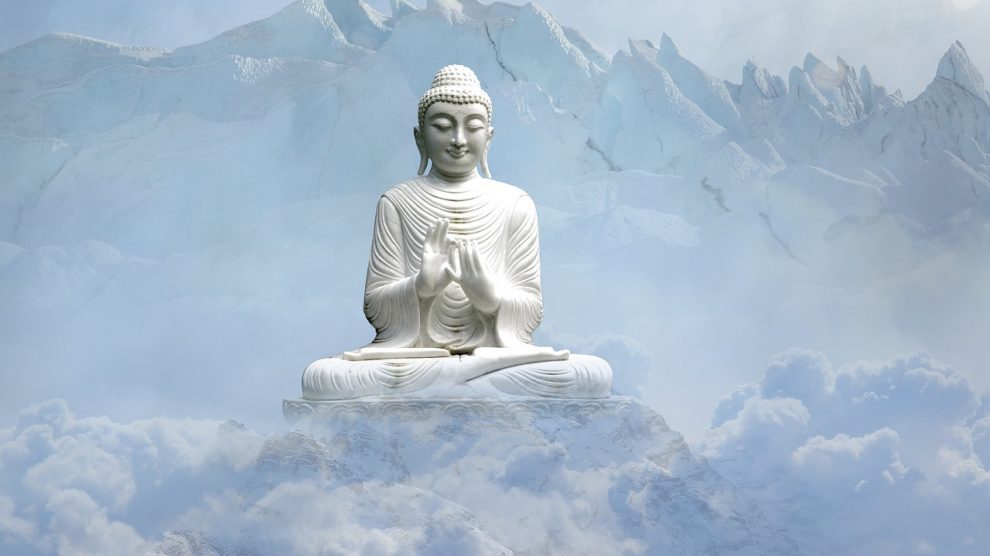 One day the Lord Buddha was meditating. An elderly man came in and started abusing the Buddha most ruthlessly. The Buddha remained absolutely silent.

How long could he continue his abuse? After a while he stopped and was about to leave the place. But the Buddha said, “Just wait, please. I have something to ask you. Tell me, when you offer gifts to a person, if he does not accept your gifts, what do you do?”
“I just take them back.”
The Buddha said, “Well, you have been trying to offer me the gifts that you brought with you. Since I have not accepted your gifts, you are taking them back with you.”
The man felt sad and ashamed of his conduct. He begged forgiveness of the Buddha. The Buddha forgave him, and eventually he became a close disciple of the Buddha.
(Sri Chinmoy, Whatever you want, God gives, Agni Press, 1994)

This is a story about Lord Buddha. Lord Buddha was in deep meditation, very deep meditation, when two musicians passed by. The elder of the two was giving advice to the younger one, saying, “If you want to become a great musician, do not play on the higher strings. They will snap. And if you use only the lower strings, then there will be no music. Play in the middle.”
Lord Buddha said, “This all applies to me! I have taken up such an austere life. No, I must not continue!” Then Lord Buddha started eating in a normal way. He said, “This musician has saved my life. He has shown me the right path.”
It is said that Lord Buddha’s middle path came from these two musicians. The older one was advising the younger one to use the middle notes and then Lord Buddha started following the middle path.
(Sri Chinmoy, I wanted to be a seeker of the Infinite, Agni Press, 2012)

There was a great King named Vindusar who ruled his kingdom wisely. When he died, his eldest son, Ashoka, became King. Ashoka’s brothers were all handsome and strong, but Ashoka was not at all beautiful. His brothers always used to cut jokes with him because he was not good-looking.
When Ashoka became King with the help of the minister, he wanted to take revenge. So when he got the throne, he killed his brothers one by one. Then he killed all his relatives who spoke ill of him. Whoever spoke ill of him, he killed. He also wanted to be the lord of a vast kingdom, so he went and conquered a place called Kalinga, destroying many Buddhist temples and killing many Buddhists.
One day he was in his palace-fortress when he heard some most pitiful cries. The relatives of the thousands of people whom he had killed were cursing him and lamenting and grieving for their dear ones. Ashoka felt sorry. Suddenly he heard a voice chanting, Buddham saranam gacchami, “I take refuge in Lord Buddha.” Again and again he heard this voice chanting the same words. It was so soothing to him. He thought of the Buddha’s Compassion and he felt that a change was taking place in his life, but he could not account for it.
When he went outside into the streets, he saw one of the greatest followers of the Buddha, Upagupta, chanting nearby. Ashoka approached him and said, “Please forgive me, but I have heard some chanting, and now I wish to be initiated. I want to be a follower of the Lord Buddha.”
Upagupta told him, “It was I who was chanting before.” The King was deeply moved. Upagupta initiated him and he became Upagupta’s disciple.
After that, Ashoka took refuge in the Lord Buddha — in the Buddha’s Compassion and in the Buddha’s Light. He no longer paid any attention to his Kingdom nor to his throne. Eventually he became a religious mendicant. He put on an ochre cloth and roamed from place to place all over the world, chanting the Buddha’s glory and establishing Buddhist temples. He opened up free hospitals for the poor and unreservedly gave away things to the poor and the needy. He became compassion incarnate. Even his own daughter went to Ceylon to spread the Buddha’s Light. Everywhere Ashoka went — even inside mountain caves and on pillars — the Buddha’s message was inscribed: Ahingsha parama dharma, “Non-violence is the greatest virtue.”
(Sri Chinmoy, Great Indian meals: divinely delicious and supremely nourishing, part 2, Agni Press, 1979)

Who is the real mother?

This is a true story. It took place in India thousands of years ago.
One morning a young mother went to a lake to bathe. Before entering the water, she placed her little baby under the shade of a large tree. While she was in the lake, she saw a strange lady playing with the child very affectionately. This lady said to the mother, “Do you mind my playing?”
“No, no, no,” said the mother.
The child itself was not so happy, but from a distance the mother could not see her child’s discomfort. She continued bathing, swimming and so on. All of a sudden, she saw that the lady was taking away her child. She quickly came out of the water. In the meantime, the stranger had covered a considerable distance. The mother ran and ran and ran to recover her child. When at last she caught up to the stranger, they had a fight. Alas, the stranger was much stronger than the mother.
The poor mother cried and cried, “Please give me my child.”
The stranger insisted, “No, it is my child.”
They went on fighting and the little child was in between the two. Meanwhile, some villagers who heard the mother’s screams came rushing to the scene. The mother cried, “Please help me! She is abducting my child.”
The stranger said, “This is clearly my child.”
What could the villagers do? They did not know whom to believe. Finally they said, “Let us take these two ladies with the child to the wisest man in the village.” The wisest man in the village happened to be a very, very old doctor. For years and years he had guided the villagers in all their problems. When they all arrived at his house, somebody explained the situation to him. The real mother was crying pitifully, but the other lady was screaming for justice and only pretending to have genuine love and concern for the child.
The village doctor said, “Ah, it is a very difficult problem. I hope I can succeed in solving it.” Then he asked both the ladies, “Tell me honestly, whose child is it?” Both of them claimed it was their own. So the doctor made a small circle on the ground and placed the child in the middle. Then he told both ladies, “One of you will grab the child’s arms and the other will grab its legs. When I give the signal, both of you will start pulling. Whichever one is able to pull the child out of the circle towards her will be declared the winner.”
Both ladies agreed to this arrangement. As soon as they started pulling the child’s arms and legs, the child started crying pitifully. The real mother immediately released her grip. She cried, “How can I do this kind of thing to my child!”
The false mother easily pulled the child towards her. She was so happy. Dancing with joy, she said, “Look, I have won, I have won! So it is mine!”
“Wait a minute,” said the doctor. “Have you truly won?”
“Yes,” said the lady. “You told us that whoever wins this tug-of-war will keep the child.”
The old doctor said, “No, only a mother’s heart is full of concern for her child. The real mother was supposed to fight, but she saw that her child was getting hurt. How could she deliberately hurt her child? This child belongs to the loser.”
The other lady got furious. She said, “You did not keep your promise!”
The old doctor said, “My promise? It was my wisdom to catch you. I knew from the beginning that this was not your child.”
As soon as he said this, the bad lady started running very fast in the direction of the forest. Nobody could catch her. Then the old doctor said, “She is an asura.” This wise doctor was the Bodhisattva, the Lord Buddha, in one of his previous incarnations.