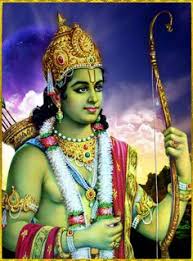 The life of Sri Rama, the first Avatar on Earth, is narrated  in the ancient epic called Ramayana.  The age of  this epic is very difficult to determine. Rama, the king of Ayodhya, lived before Krishna for whom historians think he lived 5000 years ago, but spiritual teachers of the  highest order date the time of Krishna’s life differently (“Some scholars say that Sri Krishna lived on Earth 5000 years ago. I do not agree with them. Sri Krishna came  8000, 9000 or 10000 years ago” – Sri Chinmoy) There is no doubt, Sri Ramachandra lived long, long time ago.

He was born in Kosala, as a son of king Dasharatha and queen Kaushalya. Following  the customs of that age, king Dasharatha had two more wives: Kaikeyi, with whom he had a  son Bharata, and Sumitra, with whom he had twins Lakshmana and Shatrughna. As a first-born, Rama was destined to inherit his father’s throne. The day of his crowning was approaching when, persuaded by her evil maid  Manthara, queen Kaikeyi asked the king to give her two boons which he had unconditionally promised to give while she was taking care of him during his long and serious illness. At those times, the given word and the promise had a force of law and moral people were absolutely obliged to obey them, regardless of the price they had to pay. Knowing this, queen Kaikeyi, fearing that her son Bharata and herself would fall into disfavor when Rama becomes the crowned king, asked the king to fulfill those two unconditional promises that he had given to her. As a first boon, she demands that Rama  be exiled for fourteen years to Dandaka forest, and as a second, her son Bharata to become a king. After hearing these demands, the king lost his consciousness, but he had to keep his word. Without discussion and with a smile, Rama accepts to go into exile, considering his father’s word to be the supreme moral and spiritual law. His brother Lakshmana  and his wife Sita  also go with him. Shortly after Rama’s departure, king Dasharata dies of grief

At the time of Rama’s departure, Bharata and Shatrughna were not in the castle. When Bharata returned and found out what had happened he flew into a rage for what his mother had done. He was deeply loyal to his brother Rama and to the principle of righteousness. Not even thinking of taking the throne, he rushed into the forest with the army, with the hope that he will persuade Rama to return to Ayodhya and become the king. But Rama replied, “I will certainly not disobey my father. You rule the kingdom, and I will fulfill my vow. I will return only after 14 years. ” Bharata only agreed to rule temporarily in Rama’s name. He took Rama’s  sandals and, upon return to Ayodhya, put them on the throne, to represent Rama in his absence.

This is how begins Rama’s, Sita’s and Lakshmana’s ascetic life in the forest. Near them lived the demon Suparnakha, the sister of the demon Ravana, the king of demons who lived in Sri Lanka and tortured all beings in his surroundings. She desired to become Rama’s or Lakshmana’s wife, but since they both rejected her, she tried to devour Sita. Lakshmana intervened and cut her nose with a knife. She went to her brother Ravana, who realized from his sister’s story that Sita was the most beautiful woman in the world and he suddenly desired to have her for himself. One of his demons turned into a golden deer and came into their forest. Sita asked Rama to catch him, but the deer lured Rama deep into the forest. When Rama hit him with an arrow, deer suddenly cried out in Rama’s voice: “Lakshmana! Sita! Help!” Although Rama told to Lakshmana not to leave Sita under any circumstances, she made him go and look for Rama. Lakshmana drew a circle of protection around Sita and left. Ravana then came, disguised as a wandering monk, and asked for alms from Sita. Deceived, she came out of the circle and Ravana grabbed her and flew away with her.

Rama had to conquer Sri Lanka to liberate Sita. But since he was no longer a prince, he did not have an army. However, an army of ape-like people who were willing to go to the war with the Rakshasas joined Rama. The most famous among them was Hanuman, Rama’s unconditional devotee and closest disciple. Rama’s unusual army, made up of monkeys and bears, arrived on the shores of the Indian Ocean and built a bridge of stones and trees towards Lanka. Meanwhile, Ravana tried to persuade Sita to become his wife, blackmailing and threatening her, but she relentlessly refused. The upcoming fight with Rama’s army was opposed only by Ravana’s brother Vibashana, who, since Ravana rejected his advice, joins the forces  Rama. The war ends with Rama’s victory. Rama kills Ravana, and appoints Vibashana as the new king of Lanka.

Knowing very well the customs of his time, Rama declared that he could not take Sita back because she had spent some time in Ravana’s castle. Sita, to prove her innocence, enters the fire. However, she comes out of the fire intact, and Rama says to the all gathered: “I knew that she was pure! I had to test her for the sake of the world, and so that everyone could know the truth! ”

Fourteen years had passed, and Rama, Sita and Lakshmana could now return to their kingdom. Rama took the throne and a long, long reign of good on Earth followed.