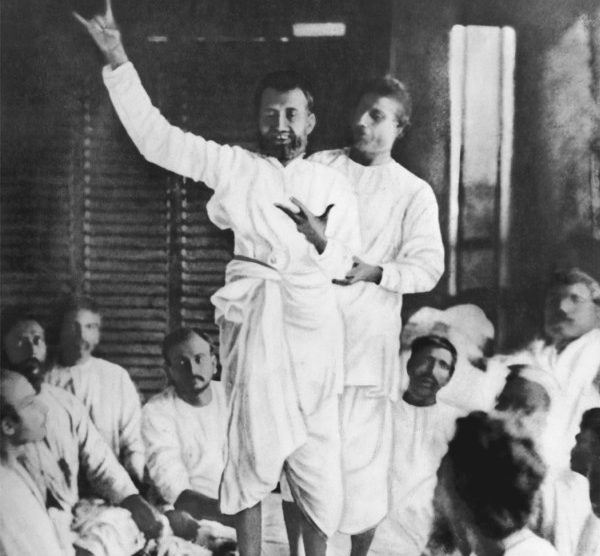 Totapuri said, “What? You have to take permission from the Mother?”

Sometimes I can play the role of Sri Ramakrishna! When he cared deeply for some disciples, at times he treated them with an iron rod. Dearer than the dearest was his Naren. Nobody could come near Naren! Sri Ramakrishna gave the ocean to Naren. To others, he gave perhaps a few drops or a few waves. To Naren he said, “I have given you everything. I have nothing more to give. Everything I have poured into you, only you.” This was Sri Ramakrishna’s blessingful utterance before he breathed his last. But once, when there were twenty or thirty close disciples gathered, Sri Ramakrishna said to Swami Vivekananda, “I cannot look at your face. I cannot look! Stop, stop the life you are leading!”

All these things we get from “M.” “M” wrote everything about his Master in Kathamrita. It has now come out in five volumes. Everything is there!

Commentary: When silence answers a question, the answer is most effective. Here, in silence one spiritual Master put the question, and in silence another Master answered. The giver and the receiver were extremely pleased with each other.

(Sri Chinmoy, India and her miracle-feast: come and enjoy yourself, part 1, Agni Press, 1977)

In his early days, Girish Chandra Ghosh lived an undivine life to the extreme. He did not care for spirituality at all, but he had a good heart. In the course of time, he became an eminent actor, playwright, poet and literary figure in his native Bengal.

One day Sri Ramakrishna said to Girish, “I see what kind of life you are leading, but do not worry. You just give me your power of attorney.”

“What is this?” asked Girish. “What do you mean by ‘power of attorney’?”

Sri Ramakrishna said to him, “Whatever you are doing, you can continue doing, only say that I am responsible. I am ready to take all your so-called sins.”