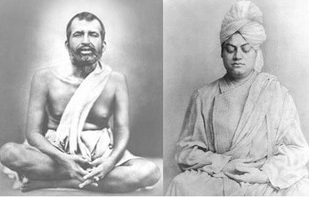 Question: Was Vivekananda an Avatar?

Sri Chinmoy: Vivekananda was not an Avatar. He had only a few glimpses of the Truth that Sri Ramakrishna lived. Sri Ramakrishna lived the highest Truth, and Vivekananda had glimpses of that Truth. Vivekananda was a great Vibhuti, one who is endowed with a special power of God, who acts most dynamically in the world-atmosphere. Vibhutis are leaders of mankind who awaken the slumbering consciousness.
We cannot call Napoleon a Vibhuti, but what Napoleon accomplished in the material world, Vivekananda accomplished in the spiritual world. The most powerful, dynamic power acted in human form in Vivekananda. Vivekananda’s real mission was to spread the message of his Master, Sri Ramakrishna. Ramakrishna achieved, but he did not manifest much. He did not care for worldly achievement or the so-called manifold development. The present-day world needs the mind. The mind need not even be intellectual; it may be just an ordinary mind that can understand basic things. But Sri Ramakrishna did not care even for this ordinary mind. So Vivekananda collected the fruits of the tree that was Ramakrishna and offered them to the world. He came to the West at the age of thirty and brought abundant light to the West.

At the time of Sri Ramakrishna’s passing, Vivekananda still doubted his Master’s spiritual height. He said inwardly, “If you tell me that you are a great Avatar, I will believe. So Ramakrishna read his mind and said, “Naren, you still doubt me? He who is Rama, he who is Krishna, in one form in this body is Ramakrishna.” Rama was an Avatar, Krishna was an Avatar, and Vivekananda’s Master embodied them both.

Vivekananda was not an Avatar; he cannot be put on the same footing with Sri Ramakrishna. I have great love and admiration for Vivekananda. My connection with him in the inner world is very close. Unfortunately, here in the West I encounter some spiritual people and swamis who belittle Vivekananda and his achievement, and dare to say he was not realised. But all I can say is that those who belittle Vivekananda are not worthy of washing his feet. God-realisation he certainly had; he was very advanced.

The height of an Avatar cannot be judged by an ordinary person. It is like a dwarf trying to scale the height of a giant; it is ridiculous. But let us not think of a spiritual Master’s height. Let us only think of his presence in our heart. When we can feel his presence in the depth of our-heart, he can be our help, our guide, our inspiration, our aspiration, our journey and our Goal.