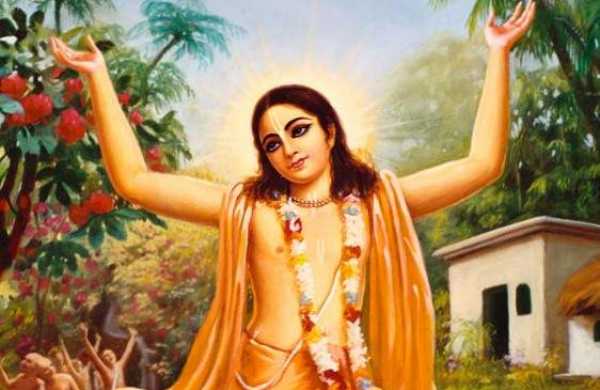 Shri Chaitanya (February 18, 1486- 14 June 1534) was a great spiritual master who is considered to be the incarnation of Lord Krishna in the aspect of a devotee. He popularized the Hare Krishna mantra and created the Shikshashtakam (eight devotional prayers), which are, at the same time, the only thing left in writing. He is often referred to as Gauranga.

Shri Chaitanya was born in Mayapur, Bengal, as the second son in a Brahmin devoted family. He was an extremely beautiful child, of brilliant intelligence. His maternal grandfather, a prominent astrologer, prophesied that he was born for something great, which is why they named him Vishwambhari, while his mother named him Nimai, because he was born under the neem tree. Numerous stories tell that from a young age he chanted Krishna’s name and sang devotional songs. Along with the interest in spirituality, his formal education also grew – he learned Sanskrit and acquired extensive knowledge in all areas. At the age of 15 he was the most important Pandit (scholar) of his time. When his father passed away, on a trip to Gaya to perform the funeral ceremony, he met his Guru, the ascetic Isvara Puri from whom he received initiation with the Gopala Krishna mantra. This meeting was a turning point in Chaitanya’s life – when he returned to his village, everyone noticed a huge change in him, from a “scholar” he became a “devotee”. Soon Chaitanya became the leader of the Vaishnavas in Nadia.

After the initiation into the order of Sannyasa (monks) Chaitanya left his village and traveled throughout India for several years, constantly chanting Krishna’s divine names. He crossed a large part of India on foot to eventually settle in Puri, where he spent the last 24 years of his life. He founded Gaudiya Vaishnavism, based on the Bhagavad Gita and Purana, whose essence is in the devotional worship of Radha and Krishna and their numerous divine manifestations. The devotees still consider him the embodiment of Vishnu in his most compassionate form. The Gajapati king, regarded him as Krishna’s Avatar and was his patron and devotee who often joined Sankirtan gatherings of his disciples. His many disciples bore witness to the numerous drownings of Shri Chaitanya in Divine Love (Samadi) and Divine Ecstasy during these years.

Brindaban (“the city of temples”), which has more than 5,000 temples dedicated to Krishna, had been forgotten until the 16th century, when it was visited by Shri Chaitanya in 1515 with the aim of rediscovering all the important places related to Krishna’s life. In a state of divine ecstasy, he wandered the local forests and relocated all the important places from Sri Krishna’s life, including the seven main temples, which are even today the places of worship.

According to 16th century biographers, Shri Chaitanya showed his Universal Form, identical with Lord Krishna on many occasions. Vaishnavas consider Shri Chaitanya to be Lord Krishna himself, who appeared in the form of a disguised Avatar (channa-avatar).

In the 17th century, Chaitanya’s student Kalachand Vidyankalar spread his teachings throughout Bengal. He traveled spreading Chaitanya’s teachings, which included, among other things, anti-caste views, as well as advocating for social justice and education for the masses.

Shri Chaitanya left the body at the age of 48, on June 14, 1534, leaving a deep mark in Bengal and India in general. At the beginning of the 18th century, Kalachand Vidyalankar made his teaching popular in Bengal, where Shri Chaitanya is still recognized by many as a compassionate incarnation of Krishna.

In the 20th century, the teachings of Shri Chaitanya were brought to the West by A.C. Bhaktivedanta Swami Prabhupada, a representative of one of the branches of the Chaitanya tradition. Prabhupada founded a movement known as The International Society for Krishna Consciousness.