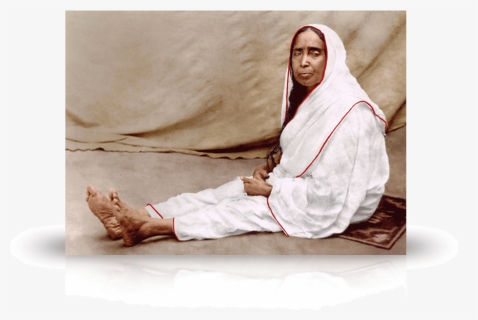 The Master’s earthly and heavenly behaviour

The Mother said, “Do not listen to him. If you take someone as your Master, you can never separate your Master’s earthly behaviour from his Heavenly behaviour. Everything is always the same in his inner life and in his outer life.”

One day, towards the end of his earthly sojourn, Sri Ramakrishna asked Sarada Devi, “Do you have dreams?”

She replied, “Yes, I do. Just last night I had a dream. In the dream, I saw Mother Kali standing in front of me. She was keeping her neck bent to one side. I asked Mother Kali why she had her neck bent. She said, ‘My son is suffering so much in his throat, so I am suffering the same way.’ ”

Sri Ramakrishna said to Sarada Devi, “It is absolutely true. Mother Kali and I are suffering together. But I tell you, since I am going through all this suffering which you were all supposed to suffer, you do not have to suffer. My Mother has sent me into the world to take upon myself the suffering of the world.”

The sea of light

One day, in a particular disciple’s house, Sarada Devi entered into trance. She remained in that state for several hours. Upon returning to her normal consciousness, she told the disciples around her that she had envisioned red and blue lights. She said that she had been swimming in a sea of light.

Furthermore, she said that if this experience had lasted for four or five days, her soul would not have remained on earth.

A vision in the Ganges

Sarada Devi saw that with his two hands, Vivekananda was scattering the water of the Ganges on the heads of countless people and they were all being liberated. It was an unimaginable gathering.

Then Sarada Devi said to herself, “How can I enter into the water with my legs and feet now that it has become Thakur?” So for many days she did not enter into the Ganges.

On the day of Sri Ramakrishna’s passing, after Sri Ramakrishna had left his earthly body, all his disciples and dear ones were swimming in the sea of tears. Sarada Devi’s grief knew no bounds. She became her heart’s heart-rending cries.

In the evening, in accordance with the custom of Hindu widows in India, she was removing all the ornaments from her body one by one. She had discarded everything except one gold bracelet. As she was removing this last ornament, Sri Ramakrishna appeared in front of her and said, “What are you doing? I am not dead, I am immortal. I am now in my Heavenly body, my golden body. Therefore, I want you to keep wearing your gold bracelet.”

Sarada Devi continued wearing that bracelet as long as she lived.