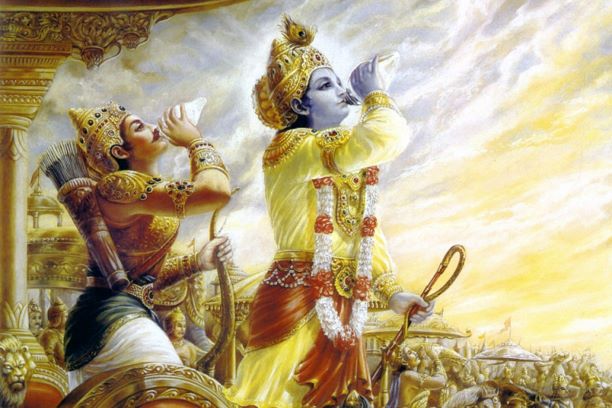 1.
In Bengali there is an immortal utterance: Ja naiBharate ta naiBharate. It means, “Whatever is not in the Mahabharata is not to be found in Bharatbarsha, or India.” Indeed, it is true, more than true.

This is a Bengali saying handed down from generation to generation. It means, “The message-light of the Mahabharata is as good, divine and immortal as Nectar-Delight.”

4.
Duryodhana was the proud Kaurava-tree. Karna was the trunk. Duhshasana was the branch with teeming flowers and fruits. The blind Dhritarashtra was the root.

5.
Yudhishthira was the compassionate Pandava-tree. Arjuna was the trunk. Bhima was the branch. Nakula and Sahadeva were the teeming flowers and fruits. Sri Krishna was the root.

Sahadeva was the fifth and the youngest Pandava. He said, “We, the Pandavas, are worshipping Krishna. We shall eternally worship Him. If you people are jealous of Krishna, no matter who you are, even if you are my superiors or my elders, I shall kick your heads off with my thunder-feet.”

In the battle of Kurukshetra he killed the matchless treacherous Shakuni, the maternal uncle of the Kauravas. Indeed, Sahadeva was a hero. But his weapon-might was far surpassed by his scripture-light.

His temper was of the quickest, and he defeated even Bhima in anger-war. Once he said to Sri Krishna, “I tell you, I want to fight with Duryodhana. If necessity demands, I shall not hesitate in the least to swerve from the path of Truth. Let Yudhisthira (the king of virtue), Bhima and Arjuna stay with their sense of dharma (the inner code of life) if they want to. Not I, never!” On their Heaven-bound journey, when Sahadeva’s life-breath left his body, Bhima wanted to know the reason from Yudhishthira. Yudhishthira said to Bhima, “Sahadeva’s final departure from the earth-scene is due to his disproportionate pride. He felt that in scripture-light nobody on earth could ever equal him.”

On his way to the exile-life in the forest he deliberately besmeared his body with earth and sand so that women would not fall in love with him for his matchless beauty.

Divinely peaceful and supremely soft-spoken by nature he always was. He said to Krishna, “O great soul, please try first to have an amiable and peaceful settlement with the Kauravas. If this process fails, you may warn them and intimidate them. Is there anything that you cannot accomplish if you want to? You can easily bring us back our lost kingdom.”

In physical beauty Nakula far surpassed all his brothers. But in physical strength, in valour, in archery and in battle-capacity even Sahadeva and Yudhishthira — not to speak of Bhima and Arjuna — far surpassed him.

After the battle of Kurukshetra was over, when Yudhishthira sat on the throne, Yudhishthira asked Nakula to look after the welfare of the army, and made him the cashier to offer regular salaries to the workers.

On their Heaven-bound journey, when Nakula’s soul left the body, Bhima said to Arjuna, “Our brother Nakula never swerved from the path of truth; he never found faults with his brothers. He always obeyed us cheerfully and devotedly. Why has he met with death?”

Yudhishthira’s immediate reply was, “He was excessively proud of his physical beauty. He and his pride were most intimate friends; therefore, death has captured him and snatched his life-breath away.”